Conveyor And Sortation Controls: Things To Consider When Choosing Between Decentralized Or Centralized 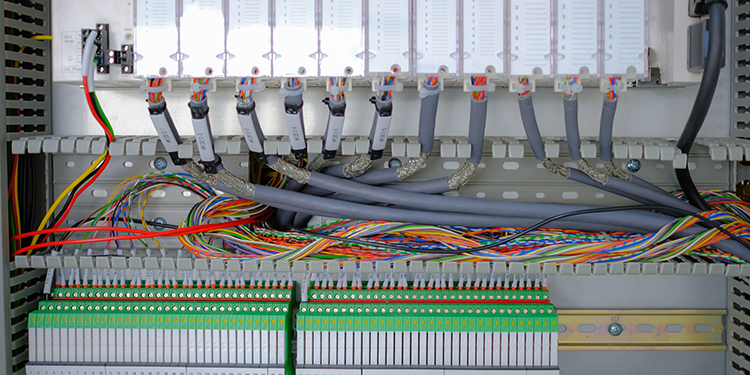 In a previous post, the meanings of centralized and decentralized control for conveyors and sortation systems were defined.  Deciding between decentralized or centralized controls for a conveyor or sortation system doesn’t have to be difficult. It does, however, require a basic understanding of the optimal applications for each architecture, as well as details about the system and its specifications. Here, an overview of these two types of controls to help with an evaluation of the two choices.

In a control system where the wiring is centralized, all of the controls for the conveyor or sortation line are housed in a single, centralized panel or cabinet. Individual devices utilized within the system — motors, sensors, articulators, diverts, switches, photo eyes and more — are all wired back to the cabinet, which houses the motor controls, programmable logic controllers (PLCs) and power source.

The larger the system, the larger the control cabinet will need to be. Additionally, more devices mean more cabling, wiring, and programming, resulting in a longer and more complex installation. Because the control housing for a large system can take up a lot of floor space, consideration should be given to the availability of square footage in the operation.

Further, with the controls kept in a centralized, secure cabinet, they can be isolated from extreme environments. This includes high or low temperature areas, or in washdown applications. However, several new I/Os and drive products are entering the market with wider temperature ratings required for cold storage applications. Additionally, these devices offer extended ingress ratings for washdown applications, such an IP69K. Selecting devices with higher IP ratings may eliminate the need for locating them in a central control cabinet.

If an operation anticipates expanding the system in the future, it may be difficult (but not impossible) to do so with a system that is centrally wired. Let the supplier know the need for future flexibility at the outset of the project design so that the system can be created to accommodate later modifications or additions. Typically, however, centrally wired systems are ideal for meeting a dedicated need with no further expansions expected.

Maintenance and troubleshooting can be more complicated in these types of systems, as it typically requires one technician stationed at the control panel and a second at the component to identify the problem. Further, the data that is so important for achieving the benefits of the Industrial Internet of Things (IIoT) — and smart or fully autonomous warehouses — is limited in systems where a discrete wiring methodology is used, as opposed to those utilizing a fieldbus communication network.

A fieldbus often enables far greater feedback from field devices than the limited discrete (or analog) signal from the sensor for control. It can also provide additional data for system analysis critical to preventative maintenance and even artificial intelligence (AI), such as machine learning (ML) required for autonomous functions. Thus, if improving an operation with the many benefits of IIoT is an objective, a discrete wiring approach back to a central cabinet may not be the optimal choice.

A decentralized system for control devices, or distributed I/O, disperses the control devices (I/Os and drives) and places them closer to the individual sensors and motors. Additionally, other components — such as PLCs, I/O, brake and overload control, communication ports, power supplies, variable frequency drives (VFDs) and more — are also placed along the conveyor or sorter line in different locations and connected together by shorter power and communication cable runs. This reduces the installation costs and complexity, as well as saves time in commissioning the system. It further reduces the floor space required for large control panels since the control panel is significantly reduced by removing control components and distributing them along the conveyor or sortation system.

Systems with decentralized control devices via a fieldbus protocol such as EtherCAT, PROFINET, & Ethernet/IP frequently use components with higher ingress protection (IP) ratings. This allows them to be used in harsh or washdown environments, although many have varying specifications for operating temperature so care should be taken to evaluate these for high or low temperature applications.

Because decentralized controls can be easily relocated, disconnected or connected to new equipment, these systems are very flexible and support a more modular infrastructure. They enable new conveyor sections to be added or relocated without the extensive additional wiring run required by a centralized system.

Maintenance and troubleshooting of a system which uses a fieldbus for decentralizing control devices can be easier and quicker, as each unit typically has a fault indicator light. Additionally, more diagnostic data is communicated across the fieldbus, allowing for quick identification of the device with the fault, or even the ability to predict it. Unlike a centrally wired system, that functionality means only one technician is typically needed to identify and resolve the problem.

Fieldbus protocols are not all designed alike, however. Each offers varying support for different network topologies, limitations on the number of devices on the network, the length of the network, and the network performance. Switches used in networks to support branching often result in packet delays. Thus, the amount of branching — and even the type of topology — needs to be considered with the required throughput of the application.

For instance, in sortation and conveying systems where a true line topology is ideal, switches built into the control devices create cascading switch delays. This can result in performance limitations for many fieldbus protocols in longer network runs, particularly where product tracking necessitates faster update rates. Before selecting the network protocol, closely evaluate the fieldbus specifications and interoperability. This will ensure that all the advantages of control component decentralization will be realized, including the ability to obtain data important for the IIoT.

Still not sure which control system architecture is right for your operation? Get application-specific advice from the members of the Conveyors and Sortation Systems (CSS) Industry Group of MHI.

Big Data Analytics And Its Value Across ...