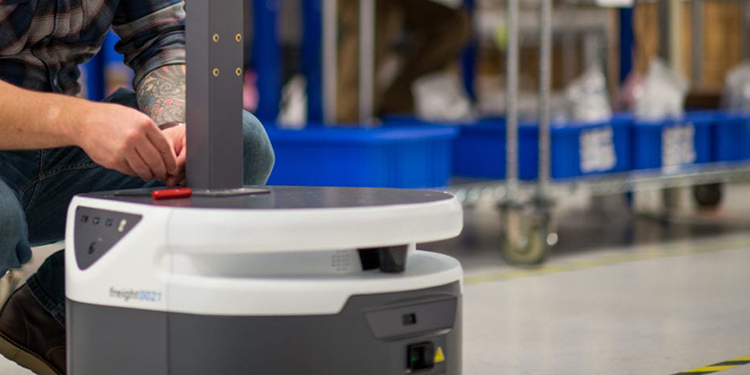 Often hailed for their inherent flexibility in terms of navigation, fleet expansion, and task adaptability, autonomous mobile robots (AMRs) are also offered in a variety of configurations and load capacities to support various material handling needs. Typically, the vehicles are comprised of a base unit outfitted with sensors for safety and navigation, a controller, and motor. The top of the base unit is configured to accept any number of accessories, depending on the task at hand.

Most AMR suppliers offer standardized accessories that are fully integrated into the vehicle’s operation for seamless functionality and fast deployment. These include:

Static Shelving. Either a single platform or a multi-tiered shelf unit (sometimes divided into specific cubbies), these accessories are often used in order picking operations for transport of picked items. They also may be used to travel between pickers to collect picks, or to transport completed orders to workstations for pack-out. Some can be equipped with light-directed picking modules to indicate item quantity and specific order position.

Carts. Some AMRs push or pull a cart; others tunnel under it to raise and lower it for transport. The carts are often used in picking operations, as well as to deliver parts lineside for assembly operations — sometimes on flow-rack.

Conveyor. Equipped with a motorized roller or belt conveyor attachment on top, these AMRs are configured to interface with sorters or conveyors, accepting a load for transport to another area the fixed equipment does not reach, or depositing a load for conveyance elsewhere.

Disinfection Devices. Some AMR base units have been outfitted with a unit that sprays a fine mist of a chemical disinfection formula to provide deep cleaning of a variety of surface materials and in hard-to-reach areas without requiring a human to be exposed to the mist during deployment. Alternately, other AMRs have been equipped with a device that projects an ultraviolet (UV) light beam that sweeps over smaller areas, such as workstations, for targeted disinfection of high-touch surfaces.

Customized Attachments. For operations that require highly specialized attachments, the majority of AMR vendors offer the ability to design and engineer unique components outside of the more standard offerings.

Looking for more ways AMRs can support warehousing and distribution operations? Connect with the members of the Mobile Automation Group (MAG).

Lessons From Operations That Implemented An Automated ...